18 Movies for Building Resilience in Children

How does your child do when he/she failed a test? How about losing a game? Do they easily give up on the subject? or go back keeping working on it? Resilience is the capacity to withstand and to recover quickly from stress and difficulties. We want our children be resilient, because life is not a smooth ride forever, there are always bumps and accidents on the road. We cannot make these disappear from anyone’s life, so it is essential to be prepared for them. There are many talks about growth mindset recently. Resilience is a big part of growth mindset. 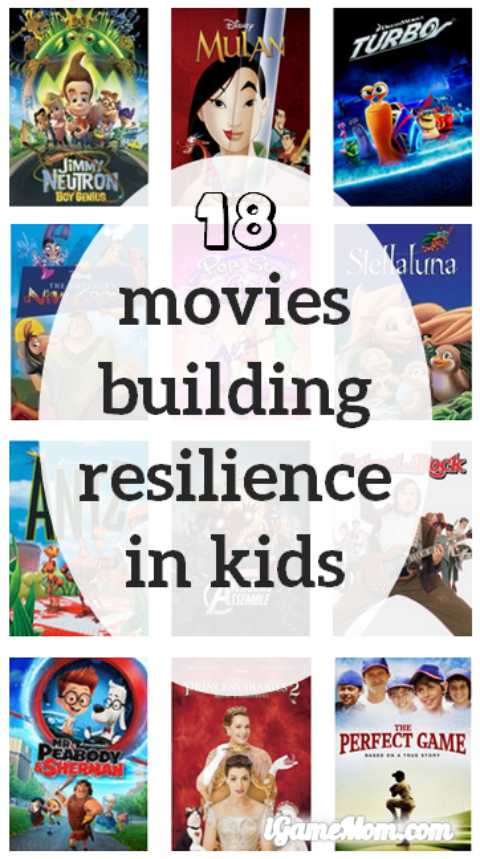 Movies of building resilience for young children
1. Jimmy Neutron: Boy Genius : When gooey green aliens kidnap all the adults in Retroville, it’s up to 11-year-old Jimmy Neutron to come up with a plan to rescue them.
2. Mulan : Disney brings an ancient legend to life in this animated tale of a tomboy who disguises herself as a man so she can fight with the Chinese Army.
3. Turbo : A speed-obsessed snail who dreams of being the world’s greatest race car driver gets his chance when an accident imbues him with high-octane speed.
4. The Emperor’s New Groove : In this animated Disney adventure, a South American emperor experiences a reversal of fortune when his power-hungry adviser turns him into a llama.
5. Angelina Ballerina: Pop Star Girls : Ballet is still the bomb, but Angelina decides that hip-hop is cool, too, when she joins forces with the Pop Star Girls to direct a hip-hop musical.
6. Stellaluna : When a cute baby fruit bat is adopted by a mama bird after being separated from her mother, she struggles to fit in with her new feathered siblings.

Movies of building resilience for older children
1. Mr. Peabody & Sherman : Resurrected from the 1960s animated series “Rocky and Bullwinkle,” canine genius Mr. Peabody and young Sherman take a dizzying ride through time.
2. Princess Diaries 2 : As the newly crowned princess of the tiny European country of Genovia, teen Mia Thermopolis learns an arranged marriage may be in store for her.
3. The Perfect Game : A seemingly impossible dream of playing baseball for the United States becomes reality for a group of impoverished youngsters from Mexico.
4. ANTZ : In this animated hit, a neurotic worker ant in love with a rebellious princess rises to unlikely stardom when he switches places with a soldier.
5. Avengers Assemble : After Iron Man persuades his fellow superheroes to reunite, the Avengers combine their skills to battle both longtime foes and deadly new villains.
6. School of Rock : Musician Dewey Finn gets a job as a fourth-grade substitute teacher, where he secretly begins teaching his students the finer points of rock ‘n’ roll.

Movies of building resilience for teens and adults
1. Silver Linings Playbook : After a stint in a mental hospital, Pat moves in with his parents and tries to win back his wife, until he meets a woman who’s as unstable as he is.
2. Chef : When chef Carl Casper’s plans for opening a restaurant in Los Angeles fail to pan out, he returns home to Miami and debuts a food truck instead.
3. Safe Haven : When a mysterious woman arrives in a small North Carolina town, she begins a new life but remains haunted by a terrifying secret.
4. Catching Fire : After her triumph in the Hunger Games, Katniss Everdeen travels through the districts on a “Victor’s Tour” while a rebellion gathers steam around her.
5. Freaks and Geeks : A group of high school students in 1980 faces various social struggles. Lindsay rebels and hangs out with a crowd of burnouts for starters.
6. Dirty Dancing : While spending summer with her family in the mountains, 17-year-old Frances falls in love with the resort’s free-spirited dance instructor.

Looking for more good movies for kids? Check out 6 Kids Movies about Lying and Telling Truth, and our collection of Educational movies for kids. You will find movie titles by themes, by season, and free movie resources.