Learn ABCs with Animals and Music

There are so many ways to learn alphabet, and it is never too many if you find a good way to associate words with alphabet for young kids. Jamaroos musical ABCs is a fun alphabet app with a little different musical twist, and it might just be the one your little one will love.

The pictures and characters are inviting and entertaining. With bright colors, fun music and easy interface, kids will be playing in the Jamaroos musical jungle for a long time. 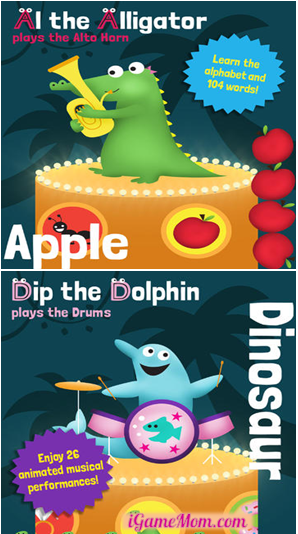 To play with the letter, all kids have to do is to pick a letter at the bottom of the screen and move it onto the stage at the center of the screen.  Each letter will bring a cute animal playing an instrument. Both the animal’s and the instrument’s names start with the selected letter. For example, on letter C’s stage is “Cop the camel plays the Cornet”, letter G shows “Gat the Gecko plays the Guitar”.

When the letters are touched, they are read aloud by the announcer, so kids have the opportunity to make associations between letter sounds and shapes. While the animal on the stage, if kids touch the animal, they will hear a piece of music played by the showcased instrument.

There are 3 or 4 more pictures under the stage showing objects whose names also start with the selected letter. For G, kids will see a picture of Gorrila, Ghost, Grape, and a Girl. They might have to spin the stage a little to see all the pictures. When kids touch these pictures, the word will be read aloud together with the letter. Both the word and the little pictures are interactive. Kids will be able to move the picture on the screen or bounce the words around, and every time the word or picture is touched, the word is read aloud. It is fun for the kids to see the little figures jumping around, and hear the funny voice reading the word.

There is a parent section on the home screen, that requires solving a simple math problem to enter. Within the parent section, there is a detailed instruction on how to use the app and keep kids engaged in learning.

Jamaroos Musical ABCs is a fun alphabet app for kids. It is available for iPhone, iPod and iPad. It is also available for Android on Google Play and Amazon.  It is $2.99 on App Store.