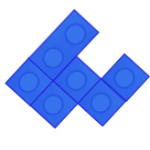 What to do with old LEGO bricks? Start a LEGO building challenge and learn math concepts and higher level thinking. This LEGO Challenge Game is for elementary kids who are learning basic geometry, and help them reinforce the concepts of area and perimeter. What is more, all the challenges not only reinforce math and geometry concepts, but also encourage higher level thinking skills. Students need some logic thinking and problem solving skills for these fun LEGO challenges on area and perimeter.

What LEGO bricks are needed for this LEGO challenge game?

Most basic LEGO bricks, such as 1×1, 1×2, 2×4. Try find different sizes and different color bricks. But no special shapes are needed.

Area is the total surface a shape covers.

Perimeter is a measurement of the distance around a shape.

How to play LEGO Math Challenge Game for Area and Perimeter

Here are details of each game:

1. Compare two shapes and pick the one with a bigger area:

Kids are given two shapes built with simple LEGO bricks. They need to compare the two shapes and decide which one has a bigger area. The games start with very simple shapes, such as regular rectangles built with two 2×2 bricks and three 1×2 shapes. Gradually, the shapes get more complicated that can be an irregular shape. Kids need fully understand the concept, and be able to break a big irregular shape into several smaller regular shapes to get the area of the shape.

There are different ways to get the areas of the shapes:
First, it is to build the shapes with real LEGO bricks. Then lay the bricks from one shape on top of the other to see which is bigger.
Two, it is to use the area formula to calculate the area of each shape and then compare the results between the two shapes.

2. Build a shape of a certain area with LEGO bricks

It starts again from simple regular shapes, then gets hard with irregular shapes. This game reinforces kids’ understanding of the area concept from a different angle.

For younger children, you can ask them to count out the number of the 1×1 units in each shape, then decide how many 1×1 units they need for the new shape. They can then pick the right LEGO bricks to build a shape to meet the criteria.

3. Compare two shapes and pick the one with a longer perimeter:

As with area games, this game also starts with simple regular shapes that are easy to build with regular LEGO bricks.

Different from the area, the perimeter is not as straightforward when comparing between two shapes, as it is not proportional to the area. For example, a 2×1 LEGO brick has a perimeter of 6, while a 2×2 LEGO brick’s perimeter is 8.

4. Build a shape of a certain perimeter:

These additional games are for kids who have fully grasped the concepts of area and perimeter and like to have more mental challenges in solving harder problems. They are mental twists for kids all ages.

For more geometry challenges, check out