ABC music is an app for kids to learn alphabet and music instruments, like their names and sounds.  It is a fun app even for parents.  It is now Free for limited time on App Store. 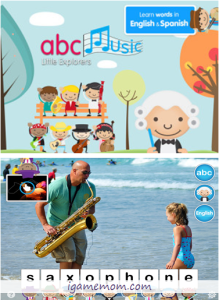 To learn some fun facts about each instrument, kids can tap on the little icon of a conductor on the right side of the screen.  For Lute, kids will learn a person who plays the lute is called a lutist, and the lute is made almost entirely of wood.

ABC Music is a fun exploratory app – kids learn alphabet and gain knowledge about music instruments at the same time. There is no set way how to use the app, it is just something to have fun with.

ABC Music works on iPhone, iPod and iPAD.  Usually $2.99, it is FREE for limited time on App Store.