Create Stories as a Family with Toontastic Jr.

If you followed me for a while, you probably know Toontastic – the creative app that teaches kids about story telling by letting them make their own movies.  It teaches the concept of “story arch”, the 5 steps of storytelling.  It is a great app.  Young kids can create stories using the app, but they may not be able to fully grasp the “5 steps of storytelling”.  To solve this issue, LaunchPad Toy developed a separate app for younger kids called Toontastic Jr Pirate.  So far, it only has Pirate scenes, but more scenes will be added soon.

In Toontastic Jr Pirate, instead of 5 steps storytelling, it offers kids choices for Beginning, Middle and Ending. For each stage, kids can pick a scene, and each scene has a short video to help the kids get started, and kids can continue the scene by moving the characters around and speaking or making sound effects. They can also choose the background music to go with the scene. After kids finish all three stages, the app will put everything together and show the whole production with music. 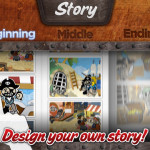 One great feature of this app is StoryShare. It lets the kids co-create a story with someone who is not physically close. For example, dad is travelling in a different city. If dad and the child log into the app and put in each other’s email at the same time, they will see the same story creation screen. Therefore, the child and dad can create the story together – say dad play one character and child play a different character. This is a very nice feature for families who have members in different locations. To use the StoryShare feature, you have to have iPAD2 and higher or iPhone 4s and higher. Personally I did not test this feature. I heard feedbacks that sometimes it doesn’t work smoothly. I am sure the developers are working on it. Don’t let the little bugs stop you using this app for story creation.

There are two versions of Toontastic Jr Pirate: one works on iPhone and iPod, the other works on iPAD and iPAD mini. Both versions are $1.99 on App Store.

If you would like to check it out or purchase it, please use the App Store button provided below. The cost is the same to you, but iGameMom gets a small percentage. Thanks for your support! Note: The button works for all countries.
For iPAD