If you kids are into soccer, they will love FIFA Soccer 13.  It is a soccer simulation game using real league names and following real game rules. It features 30 soccer leagues, 500 licensed teams, and more than 15,000 players.

In the Quick Match mode, kids play the game as soccer players.  Using a virtual joystick and couple other buttons, players can run, sprint, pass the ball, take shots, and slide tackle opposing team member.  This is a great way for kids to gain an overall picture of the game that they don’t usually get when playing a real game in the real field.  It is a lot easier for kids to understand the winning strategies and the team works.

If kids play in the manager mode, they can learn the business side of the soccer leagues.  They will watch how much income the league will have from each game.  They will also learn how to trade players between different leagues. 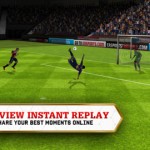 One big challenge for kids to play a team sport is to learn to work as a team.  When playing the game on the iPAD, kids get to see the whole field while playing.  This gives them a top-down view of the game, making the team work concept a lot easier to understand.

In addition to playing the game, it is also good for the kids to learn the business of the sport, such as how the leagues support themselves financially and how the players’ values are determined.

The game requires good hand-eye coordination and basic understanding of soccer rules.  Kids at age 6 or younger may find it hard to enjoy the game.

If you would like to check it out or purchase it, please use the App Store button provided below. The cost is the same to you, but iGameMom gets a small percentage.  Thanks for your support! Note: The button works for all countries.

Next post: Real Friends vs. the Other Kind – A Realistic Guide