Holiday season is a party season.  Here is a great party activity for any gatherings – play Spaceteam with your friends.  Spaceteam is very different from typical games on mobile devices. To play the game, you have to have 2 to 4 players.  It can’t be played by a single player.  Each player need have his/her own iDevice.  It could be iPhone, or iPAD, or iPod.  All players need have the free app loaded on his/her iDevice.  The players have to play as a team, perfect game for kids to learn cooperation!

When you start the game, the app will start looking for other devices that also have the app started.  All team members have to enter the gate on the starting screen at the same time to start game.  Each player sees a unique sets of control console on his/her screen.  Each player’s screen is filled with different dials, switches, and faders with names like Lustrous Prismneck, Flushbypass, and Sigmaclapper.  On top of the screen, each player will receive written commands.  The trick is the commands are for everyone on the team.  You can receive a command “Set Capacitive Omegasphere to 2”, but have no idea whose control console “Capacitive Omegasphere” is on.  You have to speak the command loudly to the whole team and hope whoever has “Capacitive Omegasphere” will set it to 2.  There is a time limit on each command.  If the team doesn’t finish the commanded task, the ship is one step closer to explosion.  What is more fun, the control console screen doesn’t stay the same all the time.  It changes once a while, and the players have to re-learn the items on their screens every minute or so.  Imagine 3-4 kids screaming different commands all at the same time!  But it is all good, they are actually working as a team! 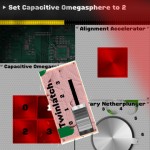 What do the kids learn

Kids learn to work as a team towards a common goal.  They have to work out ways for everyone to hear everyone and to follow the instructions.  There is no time to complain – if something goes wrong, they still have to carry out the next commands to try to prevent the explosion for as long as they can.  Any complains will just slow down the executions for the next commands.

I have not seen many apps that foster team collaborations.  Spaceteam is a perfect game to teach kids some key principles of teamwork.  To play the game, kids have to be able to read the commands out loud and quickly.  Children of age 8 and younger may find it frustrating if they can’t read fast enough to stop the explosion.

Spaceteam is available for iPhone, iPod, and iPAD.  It is FREE on App Store.  There are In-App Puchase options if you want to jump to more difficult levels or different looks for your figure icons.

Next post: iBook Review and Giveaway ($25): The Ultimate Guide to Charlie and the Chocolate Factory