I have reviewed so many apps for kids. Most apps don’t require kids to move around. The apps are all educational, but sometimes you still have the concern if they are sitting for too long. Today I found a very interesting app – it teaches math, and in the meantime, it makes kids move around to hunt for the answers. If the idea of scanvenger hunt math game sounds interesting to you, check it out.

Fetch! Lunch Rush!  is an app from PBS Kids show Fetch with Ruff Ruffman.  It is a great show.  My son loves it.  I am glad to see Ruffman has an app now.

Before the game starts, a parent or a teacher has to print out the game sheet from the game website.  On that sheet, there 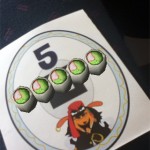 are pictures of numbers 1 to 10.  You need cut the pictures and put the printed numbers around your house (or classroom).  When kids start the game, Ruffman will give them math problems to figure out how many lunch orders they need deliver.  Once the kids finish the math, they have to search around the room to find the picture of the correct number.  They have to use the iPhone take the picture to send the order to Ruffman.  If the number is correct, Ruffman gets the order.  It is very neat, kids will see the food (sushi) drop right in front of Ruffman.

iGameMom Comments:
The math problems are all single digit addition and subtraction.  However the kids need solve them quickly.  It is fun for the kids to hunt for answers and to send the order via the phone.  It is a great game to get kids move around and learn math at the same time.

It works on iPhone, iPod, iPAD, but you have to have a camera on your device to play the game.  It is FREE on App Store.