FREE App: Have Your Own Rok Out Concert!

Sometimes, when I have an app to review and I want input from my kids, I have to gently nudge them to try it.  That was not the case for this app.  As soon as I had it downloaded, my son began making music videos.

With Rok Out Concert, kids have four characters to begin their band.  Parents can buy four more but don’t worry, the app’s security measures for preschoolers ensure that your child will not purchase them without your consent.  The function of the app is for kids to make music videos with these characters.  Each character can be altered one of three ways, there are four songs (one must be unlocked by making 5 music videos), and multiple stages for them to perform.

Kids don’t have to make videos to play but if your kids are anything like mine, they’ll want to.  Once children have decided on their band members, song, and stage, the fun can begin. 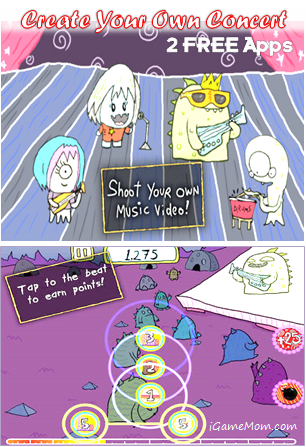 Tap each of the band members for their part of the song to begin and once kids decide on who they want to basically “solo”, kids keep their finger on them and their instrument or part of the song gets a tad louder and more prominent in the performance and that particular musician spins.  Children can also move the musicians around the stage during the performance as they were dancing in an actual music video.

While reviewing this app, I was also able to check out another one from the same developer with some of the same characters and songs. RokLienz: On Tour is basically Dance Revolution for your fingertips.  It is entirely addictive with great hand-eye coordination practice.  The songs that parents may have thought were a tad annoying, in Rok Out, become imminently singable, and more engrossing as kids take care to listen for the beats in the songs when they’ll have to tap their fingers to the screen to match the beats.  We haven’t accumulated enough coins or skill stars to pass the first planet yet (12 levels) but we are enjoying the process.  Even though this game is geared to 4+, let’s just say this game is my new guilty pleasure.

Although Rok Out Concert! is fun and silly in the best way, I preferred playing On Tour.  However, the target audience for this app in my household (my son) would pick Rok Out Concert! any day of the week and twice on Sundays.  Also, check out the band member bios when you open the app.  It is a small graphic, kind of hidden but cute and a read your preschooler will appreciate.

RokLienz: Rok Out Concert! is available for iPhone, iPod and iPad.  It is Free on App Store with 4 music characters, and 4 more characters available via In-App Purchase.  RokLienz: On Tour is available on the iPad, and it is FREE also.

If you would like to check it out or purchase it, please use the App Store link provided below. The cost is the same to you, but iGameMom gets a small percentage. Thanks for your support! Note: The link works for all countries.
Concert:

Next post: App Deals : Avokiddo Emotions is Free till Sep.1