Today I found two FREE multilingual apps. They are sequels under Journey to the West.

“Journey to the West” is a classic Chinese novel written by Wu Cheng-en in the 16th century. The main character Monkey King is a very well know name in China. Kids as young as toddlers can tell you a couple of Monkey King’s stories. The novel is about a famous Chinese Monk Xuan Zang traveled to India to find the holy book of Buddhism. Monkey King and two other characters accompanied Xuan Zang on his trip for his safety. During the long trip, Monkey King fought the devils and protected Xuan Zang and the others. 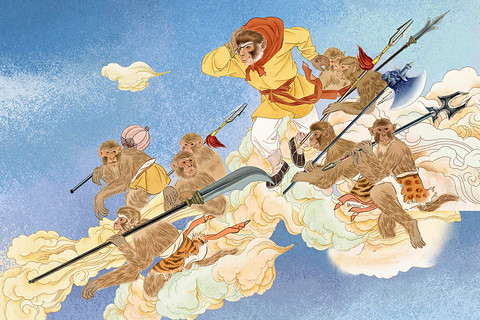 Although a long novel, Journey to the West is a collection of short stories, rich in Chinese fairy tales, monsters, legends, and religions. Many of the short stories have developed into independent ones of their own, including the two from the two book apps I am introducing today. These two stories are about Monkey King’s early life, before he started the journey with Xuan Zang.

The first app: the birth of the Monkey King. Born from a stone, Monkey King won the trust of all the monkeys on Mount Hua Guo, and became their king. He learned some great tricks and skills from a master and led the monkeys won the battle against the devil who wanted to take over Mount Hua Guo.

The 2nd app: treasures in Dragon Palace. Monkey King went to Dragon Palace to get a good weapon for himself. He ended up taking the Holy Iron, the great treasure at Dragon Palace. The Holy Iron became his best weapon that he carried with him all the time through the whole Journey to the West.

Kids can choose to read it in English, Chinese, or Japanese.  They can also choose to have the narration on or off. There is an option for the users to record their own reading.  An interesting feature is the sleep mode. When it is in Sleep mode, the screen will stay off, ie, no visuals on the screen, but only the narration. It is a nice feature for kids who want to go to sleep with the story.

Based on my own experience of living through 4 different cultures for extended time periods, I think learning some traditional stories from a different country is a great way to learn the cultural and custom. A lot of the cultural nuances are not in language. Learning the language helps communication, but won’t help the deep cultural understanding. I felt I started knowing American more when I started reading books with my son, from baby books, to preschool books, to today’s YA books. I thought I was helping him, but in fact, I was helping myself to better understand America. So what are you waiting for? Reading a story from a different country, at the comfort of staying home reading in your own language, you are giving your child the valuable cultural experience he/she will benefit in the future.

Both Journey to the West Apps work on iPhone, iPod, and iPAD. Both are FREE on App Store.

If you would like to check it out or purchase it, please use the App Store link provided below. The cost is the same to you, but iGameMom gets a small percentage. Thanks for your support! Note: The link works for all countries.
Journey to the West 1:

Journey to the West 2: