How to Remotely Control Your Computer on iPAD/iPhone?

Do you like to take your laptop with you when you travel?  Now, if you have a smart phone, be it an iPhone or an Android phone, or if you have a tablet, such as an iPAD, you don’t have to take your laptop with you anymore.  Use LogMeIn, you can remotely access your home and work computers and work on the computer like you are sitting right in front of it.   It is FREE.

The introduction from App Store is very clear on how it works: 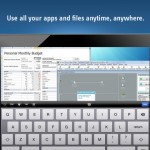 Additional LogMeIn Pro features (upgrade from the free version via In-App Purchase):
• HD video and sound streaming for seamless remote control from any device or Pro enabled computer
• My Cloud Bank integration that links your LogMeIn app with popular cloud services
• File Manager for transferring files and folders between computers and saving them to your device
• Remote printing to any AirPrint compatible printer
• Photo App Management for accessing and transferring photos from/to your iPad or iPhone photo library

I used LogMeIn for our spring break getaway.  It worked pretty well.  One thing took some adjustment was the typing.  Some of the features that come with iPhone/iPAD don’t work when you are using the app.  For example, you don’t get a period by double tapping the space key.

Upon starting the app, you can see a handy list of on-screen gestures: double-taps are double-clicks, two-finger taps are right clicks, double-tap and slide to drag items, swipe three finger up to show the keyboard, etc.  I found it a lot easier to remember one or two gestures at a time.  But all the gestures are fairly intuitive.  I did some post updates on free app alerts while we were waiting at the airport.  By the time we arrived our hotel lobby, I was quite efficient at the basic tasks.

No matter how organized you are, it is always possible you forget one piece of information and it is only on your home/work computer.  With LogMeIn, you don’t have to worry about forgetting anything, as you know you can always get to your computer no matter where you are.

Since iPhone/iPAD doesn’t have flash, and quite few websites use flash, having access to a computer makes it possible to see the flash videos on your iPhone or iPAD.

Another nice feature, although I don’t use, is it allows one registered user to have access to more than one computer from multiple mobile devices.

To use the app, you do need leave your home/work computer on.  It is ok if it goes to sleep, the app can wake your computer up.

It also has Android & Kindle version.  However, there is only a paid version for Android.  It is called LogMeIn Ignition

Next post: Free App: Mini-game Collection for the Whole Family