Little Blue Jackal is a bilingual app.  In addition to an interesting story, it also teaches kids Spanish.

The story starts with the little jackal trying to run away from a village after being caught of stealing food.  He fell into a bucket of blue paint and his entire body turned blue.  Looked distinct, he was asked to be the king of the jungle…. till one day the animals found out he was just a jackal.

The app is designed to have three levels:

Level 1, the story is read in English.  When kids tap on the pictures on each page, the corresponding words are read aloud in Spanish, and both Spanish and English words show up on the screen.  If the children want to hear the word again, they can tap either the Spanish word or the English word.  There are 50+ Spanish words through out the app.

Level 2, everything is the same as Level 1, with the addition of short conversions in Spanish between two birdies Chirpy and Tweety.  The two birds are on every page, and kids can learn 25+ conversational Spanish phrases. English translation is available for each phrase.

Level 3, the story is read in Spanish, with English written translation below the Spanish.  If kids want to hear it be read in English, simply tap the English sentences.  The short conversions between the two birds are also available.

There is a Glossary list and 4 games.  Each game uses Spanish in certain ways to share fun facts about the animals or to reinforce what the kids learn from the story. 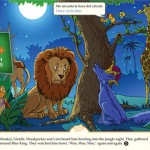 A unique feature I have not seen in other apps is the Sleep Mode.  In Sleep Mode, the recorded story is played continuously with no visual pictures.  A nice feature to put kids to sleep.

I like the moral of this blue jackal story: how we look does not change who we really are.  The Sleep Mode can be handy for busy parents to help kids calm down before going to sleep.

I don’t expect kids learn a lot Spanish with this app, but the bilingual features add great value to this app.  I particularly like the 3-level design of the Spanish features.  No matter what level the kids are at, they can pick up some Spanish from the Little Blue Jackal.

Designed for kids 10 and under, Little Blue Jackal is available for iPAD only.  It is $1.99 on App Store.