WordGirl Superhero Training is a vocabulary learning app based on the PBS KIDS series WordGirl.  In this app, you can have up to three different “superheroes” play their own separate games, perfect for households of more than one kids. Kids will love play vocabulary games with WordGirl.

Once kids choose their look and their name, they are taken to their lair to play games.  There are four games within this app; a game of logic, reflexes, navigation, and memory.  The lair also stores kids’ superhero gear that they can accumulate with enough points from the games. 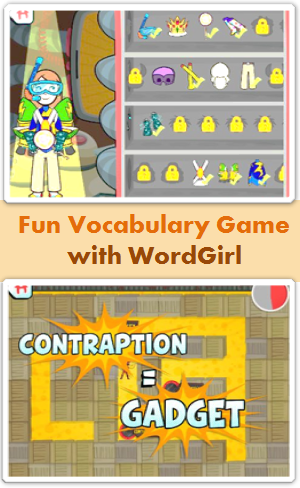 The logic game WordGirl vs. Chuck the Evil Sandwich Making Guy, is a stacking game. Kids are given an order and when they are ready, proceed to make it stacking the ingredients in the right order.

WordGirl vs. The Whammer is the memory game.  Kids are given everyday objects which the Whammer smashes and makes various pieces scatter around the screen.  It basically turns the objects into mini peg puzzles to put back together.

Captain Huggy Face vs. The Butcher is the reflex game.  Kids are given a category and the butcher throws out various meats with words on them.  Kids must be careful to only give Captain Huggy the cuts with the words relating to the appropriate category.

WordGirl vs. Dr. Two Brains is the navigation game.  Choose between pairs of synonyms to find the route to Dr. Two Brains.  Sometimes you use both pairs but not always.  This game is worth it just for the cheese puns.

The best thing about this app is that all the mini games are running on multiple levels because every game features vocabulary words at the core of them.  Each mini game is also timed and has up to 30 levels.

Probably the coolest thing about the app is that certain items the superheroes wear can help kids score more points in particular games.  Once kids pick the gear they want after accumulating enough points, WordGirl will give you a clue as to what that game may be.  That is why my superhero will always wear her “Mustard Gloves” while playing the logic game.

WordGirl Superhero Training is available for iPAD. It is also available for Android on Google Play and Amazon App Store. It is $0.99.