Today we have a guest reviewer Jenn.  She is a social media researcher and blogs at SocialMediaPhobe.  Jenn and I got to know each other when we were trading emails about an interview she did on iGameMom.  If you are interested in knowing a little more about iGameMom, you can read her post HERE.  Having young children at home, she is sharing a math app for pre-schoolers today – Lola’s Math Train.

Lola’s Math Train reinforces early mathematic skills for the 3-5 year-old kids. Your children will love Lola, the endearing panda that takes them on a magical train ride, making frequent stops. At each stop, Lola needs help adding, subtracting, searching for different pairs to make a sum, completing shape patterns, and sorting numbers in ascending and descending order. After answering a series of questions and travelling through different, colorful scenes, children are rewarded by selecting an animal friend to join Lola on her journey. Your children will work to fill Lola’s train with passengers – a lamb, a lion, a giraffe, a male panda, a cat, a dog – and at the end they all play together.

The app has three levels. The first helps the youngest child recognize and identify numbers through 5, asks children to click on the boxes with the most shapes, and reinforces counting skills as children arrange groups in order of smallest to biggest. Muscle skills are honed as children build numbers from puzzle pieces.
The second level asks children to add (and sometimes subtract) numbers up to 5, count up to 10 named shapes. The third level interchanges adding and subtracting up to 10 to further hone math skills and symbol recognition. 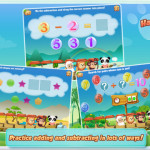 Answering questions requires tapping and dragging the number or symbol into an equation or series, which is great for the development of hand-eye coordination but might be frustrating for some preschoolers – though it’s much easier on the touchscreen of an iPad or iPhone. My 4.5 year-old son asks to play this app daily – he calls it “Panda Math,” and for him, it’s the perfect combination of vibrant colors, engaging characters, challenging (but not too difficult) number problems, and transportation (he loves trains!). There’s an entire series of Lola apps that we’ll look into just as soon as I childproof my iPad.

Thanks Jenn for a great review. As she mentioned, there is a series of Lola apps.  I reviewed Lola’s Fruit Shop Sudoku a while ago.  It is for kids age 4 to 9.  If you are interested, you can take a look HERE.