Can kids learn math with music? Today’s app actually just does this! Peg + Cat Big Gig is from the PBS kids show Peg + Cat. It is a cute new series that aims to get preschoolers excited about problem solving. In this app, the stars of the show, Peg and her purple cat use math to ‘save the day’. Young fans will love Peg + Cat Big Gig. While they are rocking out as one of five characters in the show, they will have no idea that they are actually practicing math.

When the app opens your child can choose the instrument they want to play and then a song. Before you rush off to play all the songs from the show, be sure to practice in the warm up section first.  Practice counting up and down, skip counting, basic addition and pattern completion. 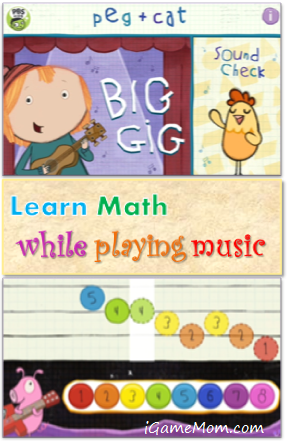 In the song screen, you will see the character playing your chosen instrument. The notes appear as different colored circles with numbers on them. In order to play the melody, tap the numbered notes at the bottom of the screen in the sequence you are shown. Songs vary in complexity and length but they are all rewarded with a special performance from Peg and the band.  The music videos are even presented with text so you can sing along in ‘Karaoke style’. There is also plenty of room for creativity! In ‘Sound check’ you can create your own songs by conducting a chorus of chickens and the cast of the characters in the show. Your masterpieces can also be saved and played back.

I really appreciated that Peg + Cat Big Gig allows kids to use music to practice math. Our Preschooler loved that she could play the songs herself. Her only complain was that she couldn’t have cat play an instrument. She loves him on the show. Cat is, however, very present in the app. He is in the music  videos and is there to guide you. Peg + Cat Big Gig  is  a great choice for 3-5 year olds whether they are fans of the new series or not!

Peg + Cat Big Gig is available on iPAD and Android Tablets and Kindles. It is $1.99 on App Store, Google Play and Amazon.