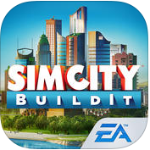 I have heard of SimCity for a long time, and my son has played the game. However I have not really get the chance to really look into the game till now. It is a free app available for both iOS and Android. After spending sometime on it today, I like it. In the game kids will build a city and learn city planning and building. It is another simulation game I don’t mind my child playing. When kids start… Read more

Parents may think that teaching children to be entrepreneurs is a bit of a lofty goal for an app, but Capital City make it accessible in a way I never thought possible. It makes learning finance and business strategy fun. The machinations of the game are simple: buy properties to earn cash flow.  Then, over time and game play, kids try to raise their cash flow higher than their expenses so that they can escape their boring job at Supercorp forever!  To that end using… Read more

Green$treets: Unleash The Loot! is an innovative game for children to learn money management and financial responsibility in a game setting. It is FREE.  In the game, kids are on a mission to save animals that are close to being extinct. For each endangered animal, kids must initially design a budget that is enough to sustain the animal’s lifestyle in natural habitat, such as animal’s food, shelter, and toys. They also need take care of the animal by feeding and playing with him. Once… Read more

Tiny Tower – What can you teach your child?

After playing Flight Tycoon for a while, my son is in the mood to build a city. I found Tiny Tower for him. It is not about building a city, instead it is a simulation game building a tower, creating and managing businesses in the tower. You can have apartments, tea shop, photo studio, comedy club, laundromat, … You make money from apartment rents, and from selling the products. When you make enough money, you can build more floors. One… Read more

I have been partnering with my son on a game called “Flight tycoon”.  It is a game he found in the App Store, and since it is free, we downloaded for him.  At first, I didn’t pay much attention to the game.  One day, when he showed me what the game was about, I found it very interesting and educational. It is an airport simulation game.  To play the game, you have to build an airport and buy airplanes.  To keep you airport… Read more