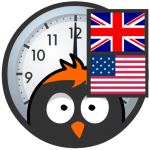 Extransit just released an update of the educational kids app Moji Clock Trainer. The great new thing about the new version is that you are able to switch between the standard British and North American time formats (quarter past twelve vs. twelve fifteen) when practicing how to tell the time. We’ve decided to keep the app free during November.

For more information, go to the app on App Store.

Note: App news submitted by app developers are not reviewed by iGameMom. We only verify the links before publishing the news.

Previous post: Educational Holiday Gifts for Kids To Go with iPhone and iPad