Introduction from the App Store:

Two players, representing 2 teams, play a 3-inning baseball game as they practice their 1–6 or 6-12 multiplication facts. The players take turns at bat. On most turns, the player at bat is pitched a pair of numbers. The player multiplies the numbers and then enters the product on a keypad. If the answer is correct, the batter hits a single, double, triple, or home run. On some turns, the pitch will result in an out instead of a pair of 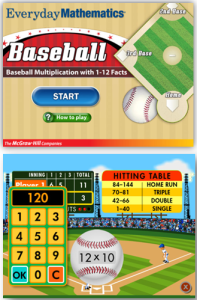 numbers. After 3 outs, it is the other player’s turn at bat. After 3 innings, the player with the most runs wins!