The first Paddington Bear book was published in 1958.  Since then, over 70 titles were published and the books are translated into 30 languages and are sold millions of copies worldwide.  The app is adapted from the first book, but with R.W.Alley’s illustration.

There are about 30 pages in the app.  Each page has some animations, but not too much.  Kids will still be able to focus on the story content and words.

There are three ways to read the app: 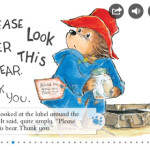 Read to Me: the app will be read professionally to the kids
Read On My Own: there is no narration
My Recording: Before using this option, you can record your own reading.  You can record page by page.  If you are not happy with the recording, you can go back to that page and record again.  The app supports more than one recordings, as long as you give each recording a different name.  After your recording, kids can hear your voice, or their own, reading the book.

In addition to reading the story, kids can take pictures with the Paddington Bear, and save it on your photo library.

This is a great app to introduce the Paddington Bear to young kids.  I like how they put little interactions on the pictures.  It is just enough to get the kids into the story setting, but are not too much to distract the reading.  With three reading options, it fits a broad age group: toddlers can listen to the book from a parent or the narration, school age kids can read it by themselves.  The record your own reading option can be a good way to encourage reluctant readers to read more by themselves.

The Paddington Bear app works on iPhone, iPod, and iPAD.  It is FREE (from $3.99) for limited time on App Store.