FREE App: The Aesop for Children

Aesop’s fables are some of the most well known in the world and have been translated in multiple languages and become popular in dozens of cultures through the course of centuries. I remember reading Aesop’s stories when I was a child. The stories have been told and retold in a variety of media, from oral tradition to written storybooks to stage, film and animated cartoon versions—even in architecture. 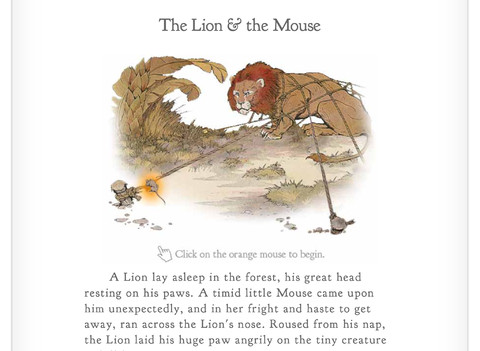 It is a great book to read with your child, short stories with morals at the bottom of each story. Kids will also learn the origin of aphorisms such as “sour grapes” and “a bird in the hand”. There is no narration in the app, kids have to read it by themselves, or read with a parent. All the pictures are small, taking about a quarter to a third of a page, but they are beautiful, with light animation or video.

It is a wonderful app. I am so glad I found it.

It works on iPhone, iPod, and iPAD. It is FREE on App Store.

Next post: Expand Vocabulary with Word A Day Visuals and Audios