Since the publishing of his first book (after more than two dozen rejections) in 1937, Dr Seuss has encouraged readers to imagine. This week we were lucky enough to read four of his earlier titles on our iPAD.  While an e-books can’t replace the original printed books, these apps make the stories come alive in a way that even Dr Seuss himself could have dared imagine.

4 Dr.Seuss Books of the Greatest Imagination 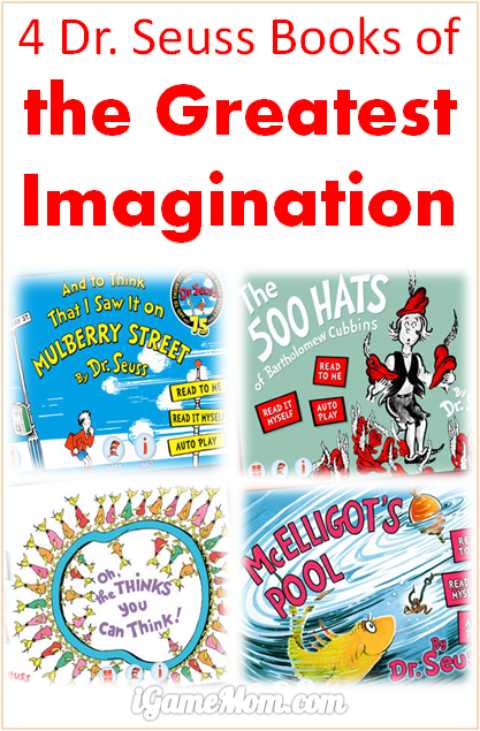 Features on all the Dr Seuss apps:

In all four titles by Oceanhouse media, the narration was excellent but we also loved the option of recording your own voice. It would be great to have Grandma record a story so she can read to the kids even when she is 10,000 miles away. My daughter also experimented with it, to hear how she sounded when she read aloud. One of the less obvious app design features was one I really appreciated! Many children’s e-books we have read, turn pages very easily and any interaction really interrupts the narration. If you have smaller children who want to touch the screen a lot this can be a big issue. These apps do not flip pages very easily and you can interact with it but doesn’t stop the flow of the story – yay!

The first app we read was Oh the thinks you can think. This was our favorite. In the other titles we reviewed the illustrations were shown as they would be in the print version, but with interaction and sound. With this app the pictures are presented in pieces as the related text is read by the narrator. Watching the creatures appear and spiral around make you feel like you are imagining it yourself. It is narrated by a cheerful female voice and the kids thought all the words and rhymes were as good as another favorite ‘Oh the places you will go’. The story doesn’t have a storyline as such; it is really more of a license for kids to let their imagination go wild.

And to think that I saw it on Mulberry Street was the first Dr Seuss book published (in 1937). Marco’s father asks him to take note of interesting thing on his round trip from home to school each day. Unfortunately, today all Marco sees is a horse pulling a cart. Throughout the story Marco stretches his imagination to craft a progressively bigger and better version to tell his father. The app does a great job of bring Marco’s imaginings to life. As well as the text interaction, there are sound effects when you touch the vehicles and music when you touch the band members. If you touch them in quick succession you hear them all play together.  In the ‘read to me’ mode the voice sounds like Marco himself is talking.  The story appealed to my seven year old more but the interaction of the app kept my three year interested.

We met Marco again in McElligot’s Pool (published in 1947). McElligots pool is a polluted pond that Marco has taken to fishing in. After 3 hours without a bite, a passing farmer tries to convince Marco that he won’t be catching anything in this little pool.  Marco insists that the pool may be enormous. He treats the farmer to page after page of every fantastical ‘fish’ that could be swimming below. The art in this book is amazing; it captures the pictures that are in Marco’s mind in bright full color. We loved the message of being optimistic and not letting others convince you that you can’t achieve your goals.  “If I wait long enough, if I’m patient and cool, who knows what I’ll catch in McElligot’s Pool!” The kids laughed as they listened to the grandfatherly sounding narrator describe the funny sounding fish and the pictures of them.

My 7-year-old and I read The 500 hats of Bartholomew Cubbins together. Young Bartholomew, wearing his favorite hat,  is selling cranberries when the king rides through town. Everyone takes off their hats in respect. To his surprise, the royal carriage stops in front of Bartholomew and the king demands to know why he has not removed his hat. Bartholomew is baffled to find that every time he takes off his hat, there is another one under it! The King is getting more and more aggravated and calls in experts to  remove the hat. There are some fairly scary methods used so it may be a bit scary for some younger children (there is mention of black magic). The suspension builds up and we were on the edge of our seats wondering what would happen. The ending doesn’t disappoint! This title is longer than the later Seuss titles we are familiar with. It is also written is prose rather than the rhyming text and the illustrations are in black white and red. For this reason the app does not seem is not as colorful and interactive. However, it would take away from the story if it was.

We were inspired to use our imaginations this week with some Dr Seuss inspired activities. 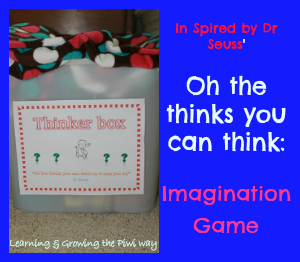 Our “Thinker box” was filled with all sorts of random objects. If you have ever seen whose line is it any way you may have seen the improvisation game where they are given a random prop and use it in a little skit.  This is what we do with the Thinker box. I pulled out an object and we took turns acting out what we imagined the prop could be. Today I included cardboard tubes, a little metal tin, a large paintbrush, a paper bag, and a hand cranked flash light, a little foam box. It gets everyone laughing! A paper bag turned the kids into a snail and the paintbrush became a mustache and a unicorn horn.

If you would like to check the apps out or purchase them, please use the App Store link provided below. The cost is the same to you, but iGameMom gets a small percentage. Thanks for your support! Note: The links work for all countries.