Video Touch is a series of apps from the creator of Sound Touch, but instead of the flash cards showing real life photographs of animals, instruments, and objects, it shows short video clips.  For a review of Sound Touch, you can visit Sound Touch – A Flash Card App

Toddlers and preschools love to be able to watch animals move, music instruments be played, and transportation vehicles move about. This app is a step above the original Sound Touch by putting photos into motion, but has the same developmentally goals in mind – object exploration and recognition.

The app is quite simple to use. Press on the clip-art of an object and a video pops up of that object. It was developed with the littlest users in mind; requiring just a tap of a finger to enter a video. Tap to open and tap to close. There are four different 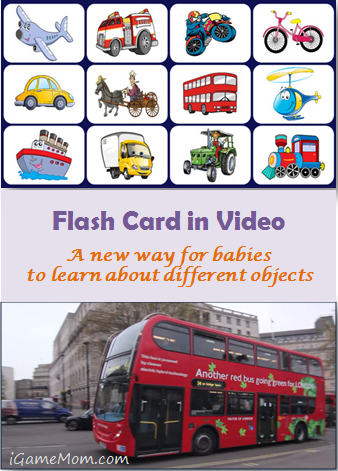 videos for each given object. Offering variety to what your child can explore. This app contains no confusing menu’s or pages, just a simple user friendly interface.

All apps require separate downloading but do integrate with each other. Meaning while within one app, if you have another app downloaded on your device you can switch between the two without ever leaving the app. Much like how Sound Touch has the category icons at the bottom of the screen, the icons for the apps you have on your device show up on the bottom of the Video Touch screen.

This app quickly became one of my favorites although I was disappointed to learn there is no dubbing feature like there is in Sound Touch. For example when dog is pressed in Sound Touch you can have a voice over speak the word “Dog” to the user, in Video Touch there is no such feature. It is a great way for children to develop name recognition and hopefully a feature that will get added to Video Touch in the future.

Needless to say this is a “go to” app for my toddler son. His favorite are the vehicle and music apps, watching a garbage truck load up a trash can, a plane take off, or seeing an instrument played. He gets a lot of enjoyment from watching the short video clips.

Video touch apps are available for iPhone, iPod, iPAD. Each app is $2.99 on App Store.

Today’s app is reviewed by Daisy Simpson. Daisy is a proud mom to an active toddler and works part-time in a hospital where she utilizes technology in her work with helping kids cope in the medical setting. Her family loves being outdoors experiencing all Minnesota has to offer.

Next post: App News : 123 Tracing HD from Kids Academy is out!