Fix The Factory is a new free app from LEGO. LEGO calls it a puzzle game, but I view it another cool game app teaching kids about programming.

The story of the game features a humanoid robot fixing the factory, where battery packs are dropped in all the wrong places.  The players’ jobs are to write instructions in code blocks to guide the robot move to the right spot, pick up the mis-placed batteries, and put them back to the right places. The robot can walk, turn, pick up something, and drop off something; but he can only move based on the commands the players put in.

There are 24 levels in the game, kids have to solve one level before they can enter the next level. 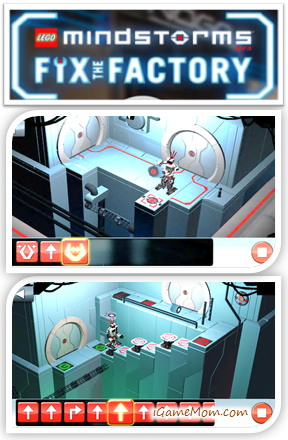 They can go back to re-play a level they’ve passed anytime. Each level is a little harder than the previous one.  At the first level, all kids have to do is to move the robot forward two blocks; Level 2 adds making turns; Level 3 requires the robot pick up a mis-placed battery. To win the game at Level 6, kids have to estimate the waiting time that the robot standing on the conveyor belt doing nothing, because the conveyor belt is moving, if the robot moves, he’s going to pass the pick-up spot.

Fix the Factory is another wonderful puzzle game teaching kids programming concepts in a fun way. I liked Hopscotch , which is also a free app teaching programming.  The difference between Fix the Factory and Hopscotch is Fix the Factory is more game like with clear levels and winning stars.  It also has more built-in challenges, such as figuring out the waiting time while moving on a conveyor belt.  It is a great game for training logic thinking, spatial intelligence and robot commanding skills.

Fix the Factory works on iPhone, iPod and iPAD.  It is also available for Android.  It is FREE on both App Store and Google Play.