One of the most difficult things as a parent of a young elementary school kid isn’t trying to help them to learn basic math, it’s helping them to recall all those facts quickly and accurately.  It’s something that takes tedious amounts of time, years even.  It is so important to learn though, because it’s the simple math mistakes that are also the easiest to avoid.  Math Kingdom can offer that sort of help for your child.  It can help you to find out what aspects of basic math your child knows or needs to work on.  Math Kingdom  also makes for great addition and subtraction review before school starts again in the fall.

When kids first begin the game, Bugsy’s friend is kidnapped and in order to rescue her he needs to go on a bunch of math quests.  Children then choose between performing addition or subtraction.  They begin on the easy setting, not being able to move up to medium or hard until they pass easy.  Children also cannot move up to the next sub-level within each setting until they 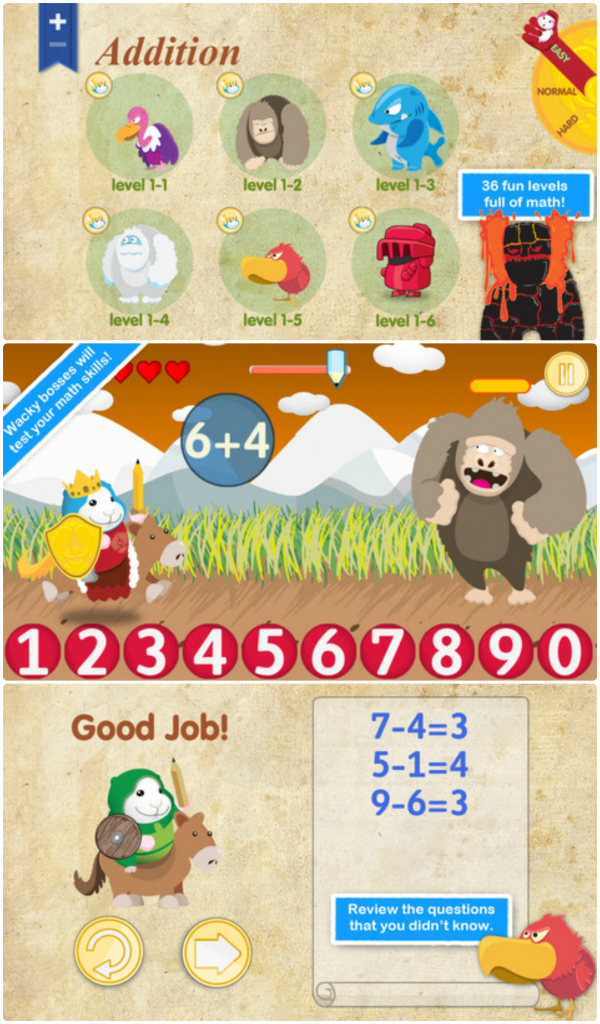 have passed it.  Kids can however, switch between addition and subtraction whenever they choose.  Kids can also move back to a lower level they have already passed for quick review.

Each level is passed by entering the correct sum for each problem the bad guys throw at Bugsy.  Each level consists of about 25 problems that come quickly at Bugsy.  Each problem is answered using the number key at the bottom of the screen.  Although the problems come spewing out of each baddie pretty quickly, they are in a bubble that allows kids to keep trying to answer (incorrectly or just be able to take their time to answer) until the bubble lands behind Bugsy.  If kids don’t answer some correctly they can go on to the next level as long as they don’t use up all their lives in an effort to get past their current level.  In the event of getting a few wrong answers, Bugsy will quickly review the mistakes.  Parents can also check their child’s progress in settings.

This app ended up being super useful and eye opening here in our household.  I thought it was the perfect app to test the kindergartner going into first grade next year.  I was a little disappointed that her recall wasn’t as good as I thought it was.  You can tell this game is designed to be a drill.  It is almost like math flash cards but way more fun and with way more interaction.  I am planning on having both my school age girls use this over the summer to keep their skills sharp and hopefully prevent my  middle child from making the easy math mistakes her sister did in the younger grades.

Bugsy in Math Kingdom is available for iPhone, iPod, and iPAD. It is $2.99 on App Store.