Free App: Learn About Animals by Creating Your Own

Switch Zoo is a free app about animals. It is a little weird, but definitely fun to play. Kids mis-match parts of different animals to create new animals, along the way, learn facts of the original animals. After they create a new animal, they can write a story about it. So it is a good writing app too.

Kids start the app with a busy interface filled with fun. In the middle is the frame showing the animal creation. Below the picture, there are 3 rows of panels. The bottom row shows the facts about the chosen animal, the middle row let kids choose which part of the animal they want to change: tail, legs, or head. The upper row has all the animals they can choose from for the part they want to change.

When I open the app, I saw a picture of Zebra. After I tap on “Head” in the middle row, I chose “bear” from the top row, I saw the zebra’s head was replaced by a bear’s head. The app does a good job making the transition so smooth that it looks like an animal with zebra’s body and bear’s head. I then tap on “tail” in the middle row, then “elephant” in the top row, I saw the new animal got an elephant’s tail, zebra’s body, and bear’s head. There are more animal choices on the left side of the picture.

Every time, kids tap on an animal, that animal’s information shows up at the bottom of the screen. Kids can choose to show facts of only the last animal they picked, or all three animals they chose to be part of the new animal.

Make sure to turn the sound on, which is on the right side of the bottom row. With it on, kids will hear the animal’s sound when they tap on that animal.

After kids decided on their animal creations, they can write stories about their animals. To start writing, they just need tap on the “show Story” button on the left side of the bottom row.

Switch Zoo is available on iPhone, iPod and iPad. It is also available for Android on Amazon app store and Google Play. All are free. For those prefer to play on computers, you can get the free download for PC and Mac, via the last Amazon link below. The link is for PC, if you need for Mac, after reaching Amazon, click on the Mac button under price ($0). 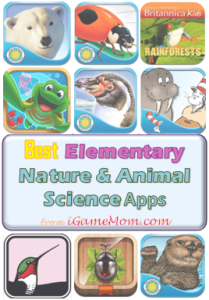