15 Physics Games That Are Safe for Kids To Play 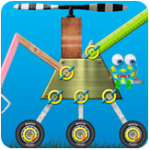 Physics Games Apps That Are Safe for Kids to Play

Where’s My Water is a physics app focused on liquid physics. Kids build pipes to deliver water to Swampy the Alligator. It is an app designed by Disney that a preschool, as well as an adult, can play.

Angry Birds is a series of apps utilizing physics in gameplay. We have an article about how to teach physics with Angry Birds. Those tips also work for other apps mentioned in this article.

Monster Physics lets kids design their own machines and moving devices, build them, and test them out. It is a “hands-on” physics lab without the mess, and kids can see how their designs work in the “real” world.

Sprinkle is a combination of Angry Birds and Where’s My Water. Kids have to find the right angle to shoot the water to put out the fire.

Stack the States and Stack the Countries are two geography game apps that utilize physics in the gameplay. When kids stack the non-regular-shaped states or countries on top of each other, they have to figure out how to keep them balanced and stay still.

Simple Physics challenges kids to build a structure, like a treehouse, or a bridge, using available materials, and then test out the design to see if it will work. Kids not only need to build a strong structure but also limit their budget within the range.

If you prefer playing games on the computer, you can find many good physics games on www.physicsgames.net.

Do you have any fun physics games that your child likes to play?

Looking for more fun app ideas for kids? Check out our Best Apps for Kids collection, where you can find apps lists for kids grouped by age and subjects. You will also like Best Science Apps for School-Age Kids